Amyl and the Sniffers: The Underworld, London – live review 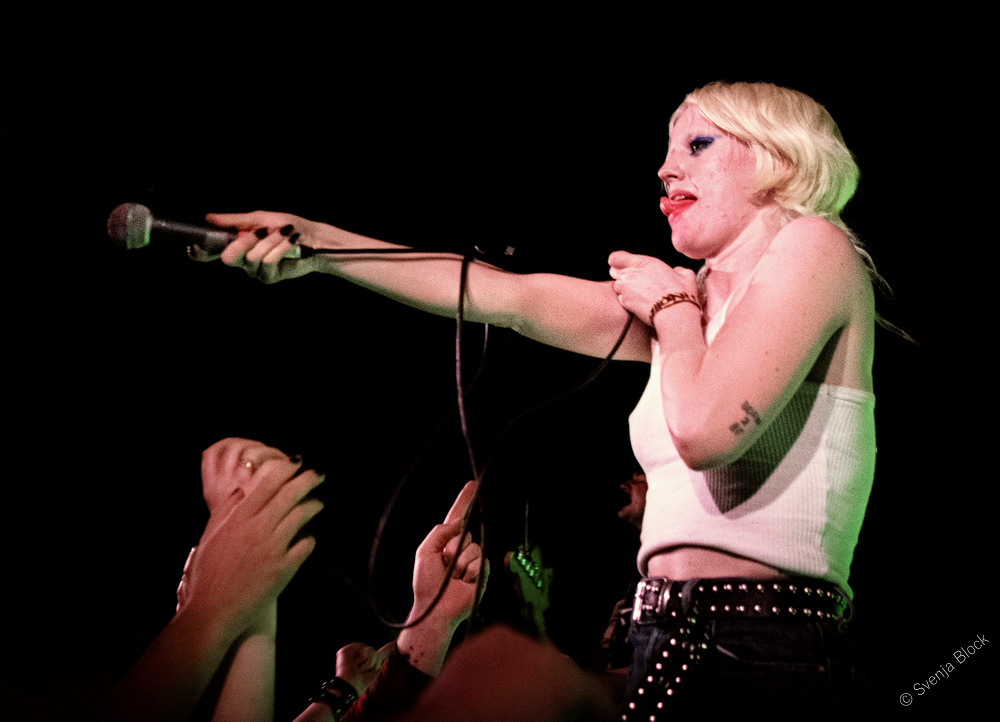 Amyl and the Sniffers The Underworld, London5th December 2019

Amyl and the Sniffers brought some welcome and decidedly scorching Australian rock ‘n’ roll to a cold, grey and dreary London. Louder Than War’s Andy Duke summoned his inner-Frank Booth from Blue Velvet and sampled poppers of the audio variety. Svenja Block, in tandem with this, captured the proceedings on camera while in the middle of a formidable mosh pit. That’s impressive multitasking.

The DNA Still Hangs Around

In the same manner that many British bands interpreted American blues music and made it their own in the 60s, our Australian cousins have excelled at putting their unique sonic stamp across many different genres since the dawn of rock. From The Easybeats to The Saints via AC/DC and Radio Birdman – the land down under efficiently adopts, deconstructs and exports more high octane versions of the original musical article. And Amyl and the Sniffers are no exception to this trend both on recordings and even more so live. 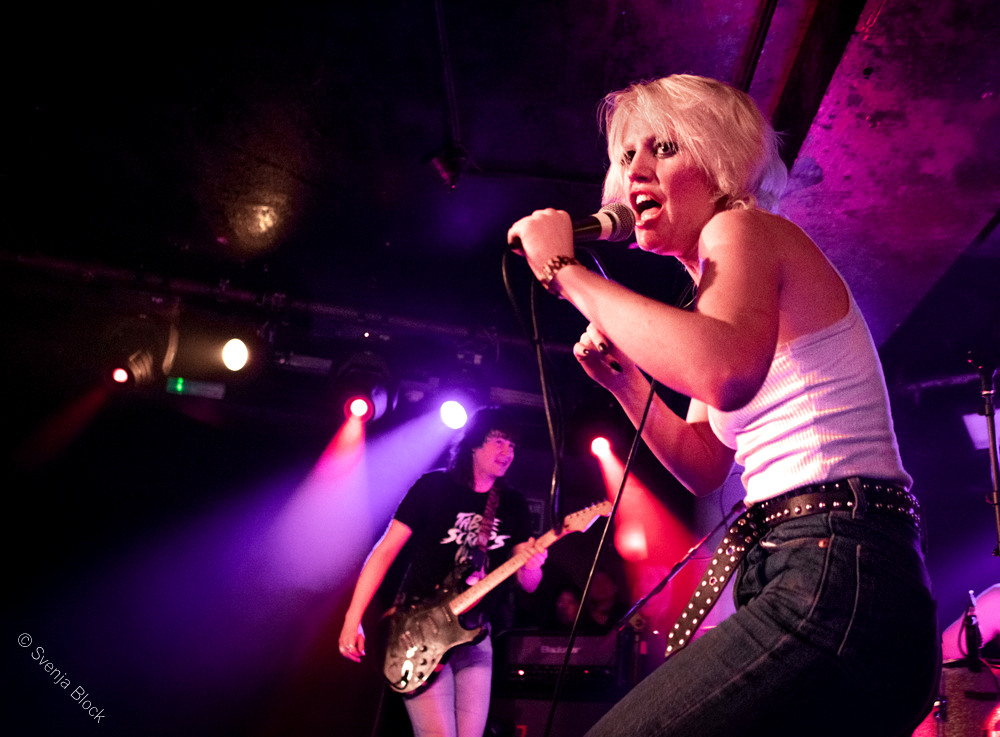 A Crowd of Sniffers

Scanning the crowd at tonight’s sold-out venue, the first thing that strikes me is the wide age range of the audience. Half the attendees are easily old enough to have pogo’d the night away at similarly sweaty venues during punk’s original ascent in the 70s. The remainder, however, were largely conceived after the release of Green Day’s Dookie. And, amongst this younger contingent, the gender balance skews in favour of women. This isn’t surprising as the headliner’s figurehead, Amy Taylor, has deservedly become a new and irreverent role model. Not since Brody Dalle, has an Australian singer made such a positive impact on punk for women. 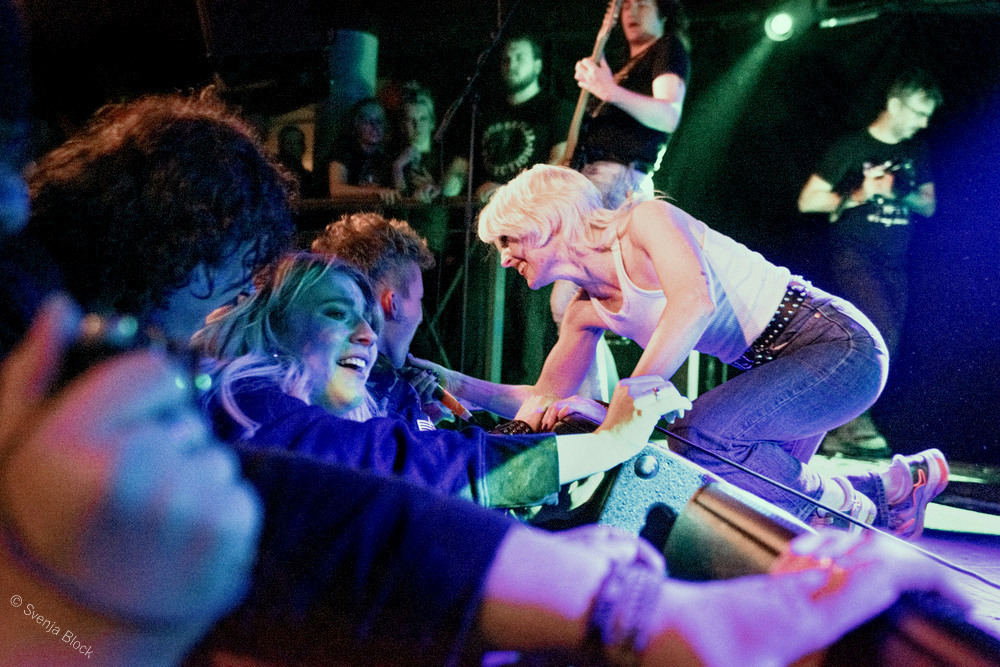 This Aussie quartet dispenses with heirs and graces. Despite being a well established live entity, the band appear to have no guitar or drum techs. As the audience push their way to the front of the stage like it’s the Central Line’s doors about to shut at the height of rush hour, guitarist Dec Martens and bassist Gus Romer are tuning up and tweaking their knobs. Meanwhile, drummer Bryce Wilson wacks his snare and toms and makes last-minute adjustments to his kit as showtime approaches. There is no big reveal. No sign of an ‘us and them’ attitude from the band. And, as their scorching set soon illustrates, very little need for the ‘fourth wall’. 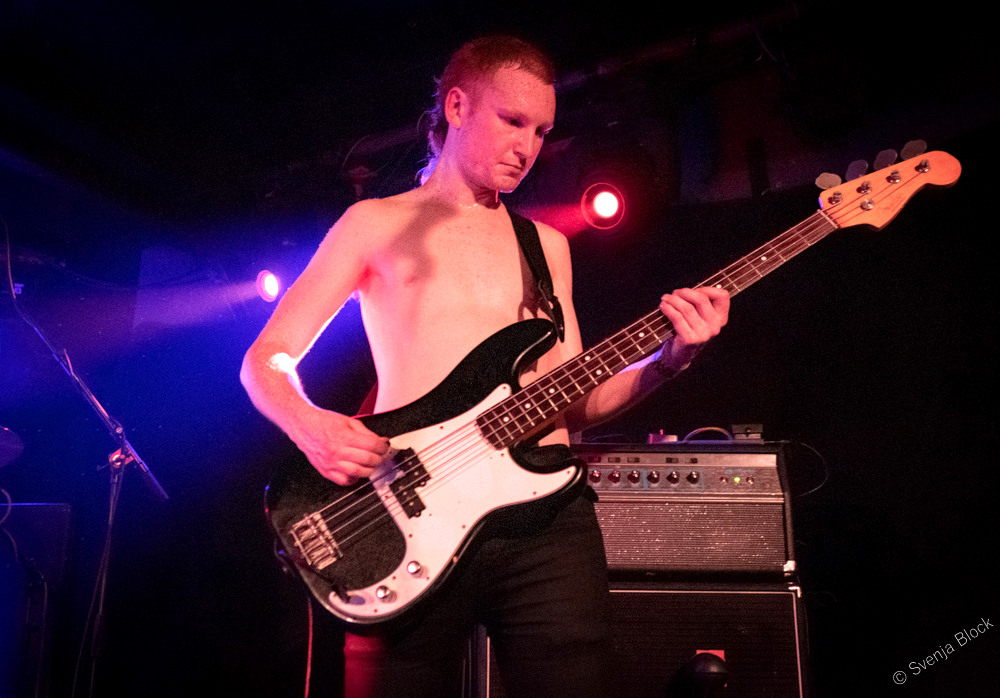 One Simple Rule – Don’t Be a CuntThe band kick off their set with Starfire 500. Featuring an extended and decidedly stompy instrumental intro, Taylor jumps on top of a flight case and rallies the mosh pit with fist pumps and hand gestures aplenty. Ferocity overshadows originality with this plucky lot. But that’s not to say that the experience isn’t unique. In Taylor, the band have a fearless frontperson who isn’t afraid to be direct. Following an incendiary version of Cup Of Destiny, Taylor establishes a simple ground rule that has extra significance in these ‘Me Too’ times. Eyeing up the venue from the front row to the exit, she doesn’t mix her words and issues a simple command. “Don’t be a cunt. If someone doesn’t want to be touched. Don’t touch ’em”. She then smiles, pauses for a second, before adding “but do get fuckin’ rowdy”. To say that this second request is honoured would be a huge understatement. And I’m pleased to report that this reviewer has never seen so many women stage diving and crowd surfing at a gig before. In addition, the aforementioned ‘fourth wall’ is repeatedly broken by Taylor who, leading by example, isn’t afraid to dive into the moshpit head first. Despite the rowdiness, the area by the front of the stage is safe and inclusive for the duration. Which, in 2019, really isn’t something we should be grateful for but refreshing to report all the same.

Toast of The Town 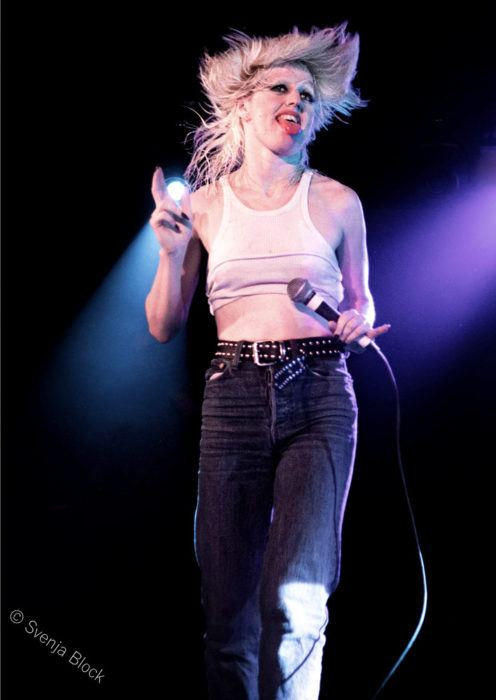 Amyl and the Sniffers deliver a bulldozer of a set that offers little respite. Like The Ramones, their tracks are largely performed back-to-back. And, when they do engage with the crowd, the banter is very much in keeping with the spirit of their material; short, sharp and to the point. After putting Mole (Sniff Sniff) through its paces, Taylor asks the audience “what d’ya reckon?’ to massive cheers. Guitarist Martens, however, uses a different approach. Following a raucous rendition of Balaclava Lover Boogie, the guitarist lifts up a can of beer and toasts the audience while asking ‘how ya fuckin’ going?’. The rest of the band join in, brandishing their own cans of amber nectar, and the crowd follows suit. It’s a simple bonding ritual but successfully makes the band and audience feel as one. Madonna once indicated that ‘music makes the people come together’. She could have been singing about tonight’s dynamic.

Whereas contemporaries like Arrow de Wilde use spectacle and confrontation at the core of their onstage performance, Taylor prefers that the band’s music speaks for itself. That said, she brings her own eccentric USP to the party. She’s not averse to sticking her tongue out and, in feline fashion, licks her hands and arms at regular intervals mid-song. Whether or not it’s the byproduct of a salt deficiency, I can’t comment, but it’s certainly memorable. 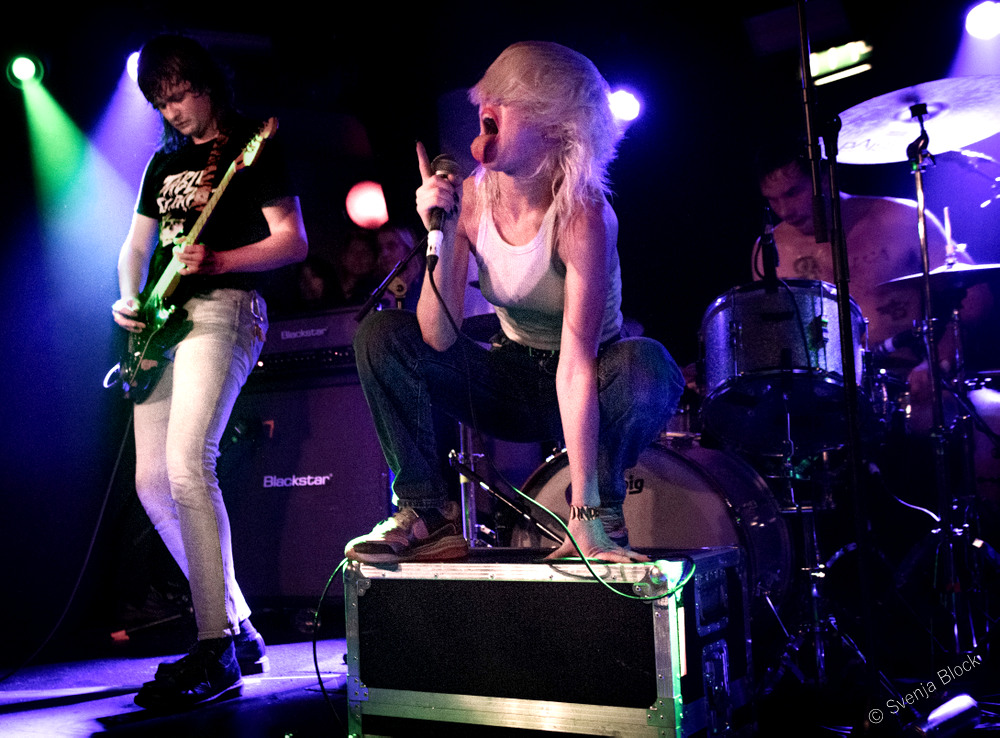 Blondie Are A Band

While this heading references Debbie Harry and her original partners in crime, I feel duty-bound to report that Amyl and the Sniffers come across as a band live. Beyond the mullets that unify the male members of the ensemble, there’s a solidity and chemistry to their performance as a unit that is captivating. And they make quite the racket for four people. With his black Stratocaster, Martens’ six-string attack inhabits a lot of sonic space for one guitar and creates a wall of sound that’s the backbone of the band’s sound. Anchoring this is the rhythm section of Romer and Wilson which manages to be tight and energetic in equal measure. Cutting through this seemingly impenetrable muscular might are Taylor’s vocals which do regular and swift pendulum swings between raw and melodic. The choruses of Monsoon and closing number Some Mutts (Can’t Be Muzzled) take on a chant-like quality when the fans join in creating an aural dynamic that wouldn’t be out of place on the football pitch. 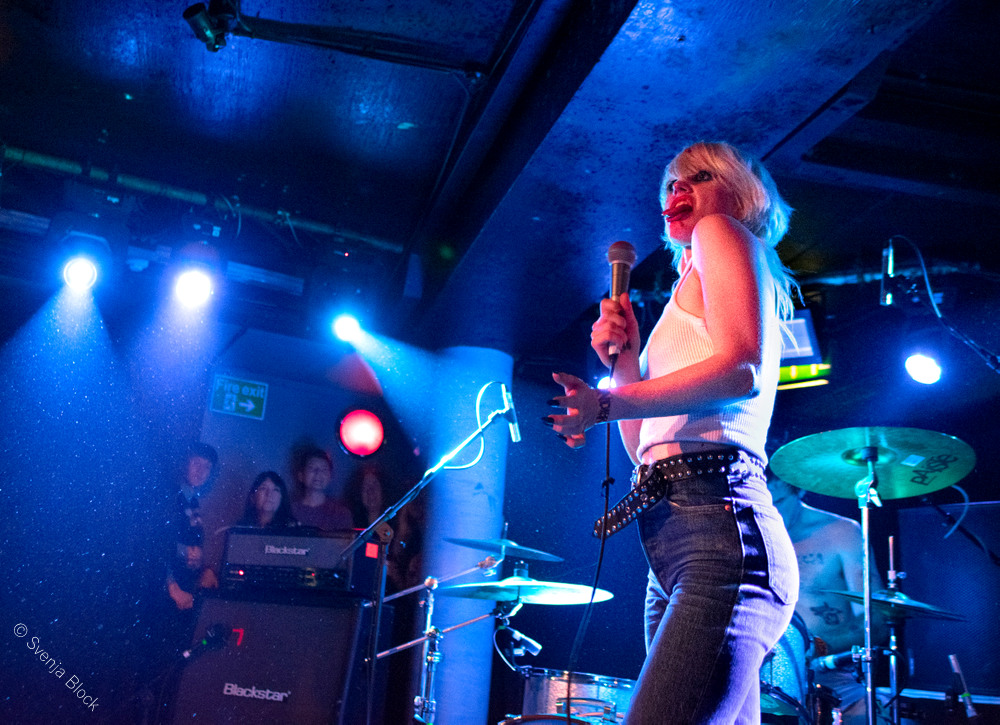 Following her heartfelt appreciation of London and this evening’s capacity crowd, Taylor’s parting comments just prior to the band’s final song addresses the heat. “This is the first time I’ve worn long pants (trousers/jeans) in ages and it’s hot as fuck up here”. On a cold December night, and with London in the grips of pre-election tension, a hot and sweaty gig is just what the doctor ordered. 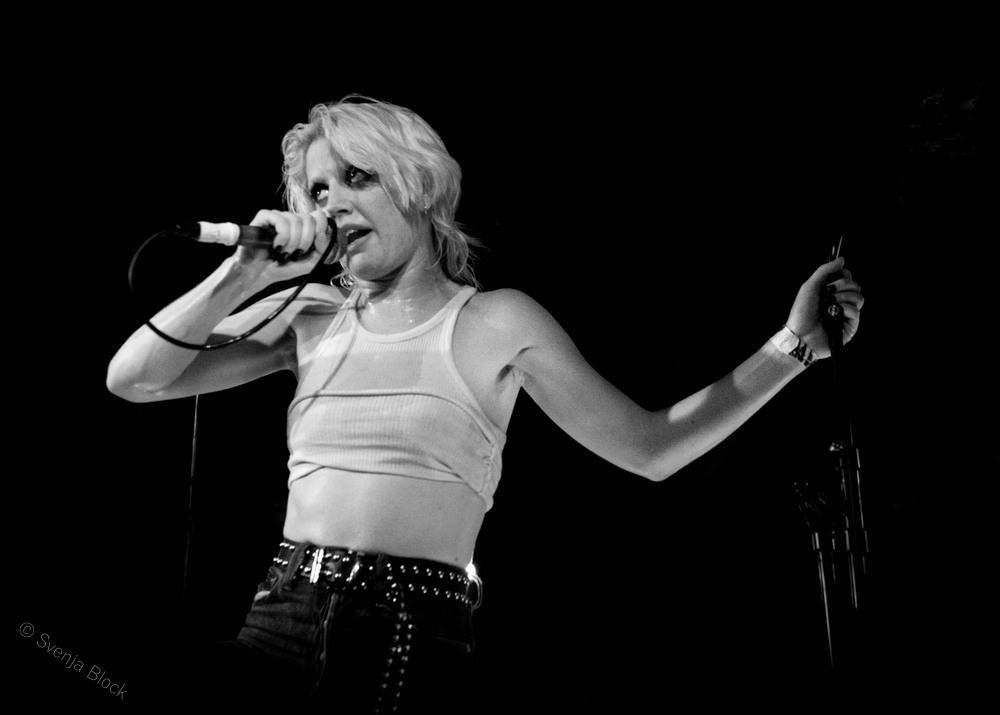 Please note: Use of these images in any form without permission is illegal. If you wish to use/purchase or licence any images please contact Svenja Block at This email address is being protected from spambots. You need JavaScript enabled to view it..

Watch Amyl and the Sniffers video for Some Mutts (Can’t Be Muzzled) here.

All words by Andy Duke. Andy Duke is a London based raconteur, musician, writer, collector of soda syphons and the man behind ‘The Dukey Radio Show’ podcast.