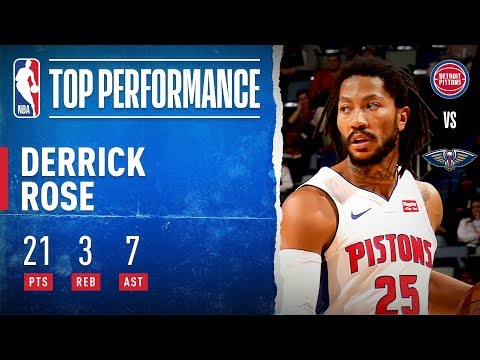 ‘I’m Born to Do This Sh*t’: Derrick Rose Relishes Game-Winner vs Pelicans

“I’m born to do this sh*t,” a jubilant Rose said in his postgame remarks, after pouring in a game-high 21 points.

“I don’t talk or boast or brag about it, but I still have goals,” said Rose, who has endured a series of physical setbacks, including an ACL tear, that have resulted in him playing for five teams over the past five years.

“I know overall where I’m at as a player and as a person, and I believe in myself,” Rose added. “That’s where it all starts — with me believing in myself — and going to an organization and playing for a team that believes in me, too. I believe this is the start.”

With the game tied at 103, Detroit worked an isolation play for Rose, who dribbled the ball out top against Jrue Holiday, one of the best defenders in the league.

“He has everything,” Holiday said. “I think it was a good play on his part. I’m not going to take anything from him. He’s a great player and the shot that he made was a tough shot. There was nothing I could do about it.”

Related Derrick Rose: ‘I Had Decided I Was Done Playing’ in 2017