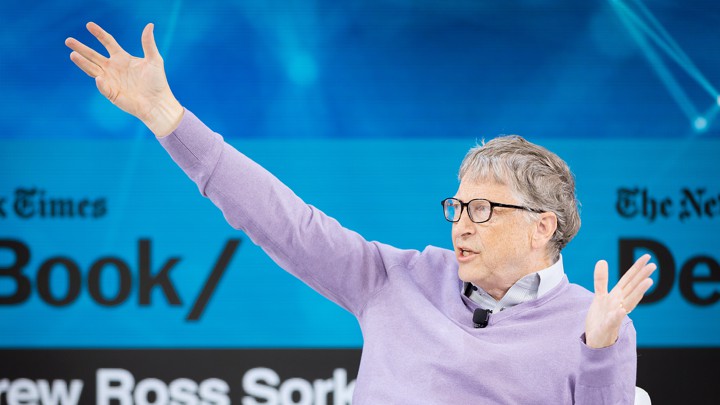 Money: It’s a concern. But the problem it poses is different for the wealthy than it is for ordinary folks—or even for just plain rich people. When most Americans worry about money, we’re worrying about income: Will I make enough money this week, this month, or this year to cover my expenses—let alone to sock some away for vacation, a down payment, retirement, college?

Modestly rich people face the same issue, but at a different scale. A family making $350,000 might feel like they’re just getting by, because so much of that income goes right out the door again—into private-school tuition, fancy clothes, or other trappings of upper-class life that seem necessary, even if those expenditures look like luxuries from a middle-class perspective.

Yesterday, at the New York Times DealBook conference, Bill Gates criticized Elizabeth Warren’s proposal to levy a 3 percent wealth tax on billionaires. “I’ve paid over $10 billion in taxes. I’ve paid more than anyone in taxes. If I had to have paid $20 billion, it’s fine,” Gates said. “But when you say I should pay $100 billion, then I’m starting to do a little math about what I have left over.”

Income is the money one receives for products sold or services rendered. Your paycheck is income. Wealth, however, is the value of one’s financial holdings. Your stocks and property are wealth. Income is cyclical, and typically the result of work, which generates money that you burn through until you get more of it. But wealth is long-term. Permanent, even. The money in your investments (if you’re lucky enough to have income left over to invest) earns interest, produces dividends, or grows in value as the market price of securities rises.

The S&P 500, a popular stock index, has risen, on average, by 8 percent in value annually for the past 60 years or so. That means that over a single year, on average, $50,000 in invested wealth would earn about $4,000 in returns. Compounded over many years, that can add up. If that return held steady and you reinvested every dollar, your original $50,000 would be worth more than $230,000 after 20 years. But that’s only if you don’t spend those earnings (called “passive income,” because you don’t have to work for them). Most people—even those with seemingly substantial wealth—don’t earn enough passive income to live on, let alone to reinvest and compound. Even $100,000 of investment principal yields only $8,000 of earnings at 8 percent a year.

But adding zeroes to the end of that number changes things considerably. One million dollars could earn $80,000 at 8 percent, enough to cover the median U.S. household income of $63,179 and leave $16,000 and change to reinvest. Over time, that wealth would build more wealth. After 10 years, you’d have $1.2 million in the bank, which would earn more than $96,000 in income (enough to account for an annual inflation rate of 2 percent) and leave you with more than $33,000 to reinvest. Of course, the market doesn’t return the same rate every year—one year investments might be up 12 percent, another only 3. That makes the mere millionaire less likely to be able to live on wealth alone.

Add more zeroes, then. Ten million dollars in wealth would produce $800,000 in income at 8 percent returns. Even if you spent half of that, you’d still have $16 million a decade later if you reinvested the remainder at similar returns. Three percent returns would still yield $12 million in wealth and more than $300,000 in annual income.

By the time you get to $1 billion—an unfathomably large amount of money—even paltry returns produce tens of millions of dollars in income. But people with this much wealth don’t earn paltry returns. They hire armies of financiers to manage their holdings. And the assets that produced the wealth in the first place—stockpiles of Microsoft shares, for example—continue rising in value, often far outstripping the market average. Since going public in 1986, MSFT has risen by an average of about 23 percent a year.

This is where the “problem” of wealth rears its head: Once you’re making enormous piles of money without doing anything for it, you have to spend it, or else see ever-increasing amounts of it “lost” to taxation. And that number just grows larger every year, well ahead of inflation and greatly in excess of any possible spending even the most immoderate of lifestyles might allow.

And so wealthy people do all sorts of things to keep what’s theirs. They exploit the lower tax rates associated with passive income. They shelter assets offshore. They establish family foundations that allow them to donate their own wealth as philanthropy, to organizations they might still influence or closely control. On top of that, they get the glory and praise that come with philanthropic giving.

As I write this, Bill Gates is worth about $106.8 billion (just so you can compare that figure with your own bank balance more easily, it’s $106,800,000,000). Recall Gates’s retort: “When you say I should pay $100 billion, then I’m starting to do a little math over what I have left over.” This is a duplicitous way to talk about Warren’s proposal, because taxing $100 billion out of $106.8 billion would amount to a 94 percent tax; Warren has proposed an annual 3 percent wealth tax on assets over $1 billion. A 3 percent tax on $100 billion in wealth is $3 billion.

Gates’s words have been widely circulated already, giving him unreasonable control over the conversation. People trust and respect Gates, who has a reputation for being a “good” billionaire, thanks to the Giving Pledge, his exhortation that billionaires commit most of their wealth to philanthropy. Gates is also a numbers guy; he’s unlikely to have misunderstood the math behind Warren’s plan. A casual observer would be forgiven for thinking that a major Democratic presidential candidate has proposed to “steal” $100 billion of his fortune.

Despite all that, let’s be generous and assume that Gates meant something different. After 30 years, when Gates is 94, $3 billion a year could add up to roughly $100 billion in total tax paid. But Gates’s wealth will keep growing every year, too. Even after the 2000 dot-com crash, and even after Gates accelerated his philanthropic giving, his assets have increased an average of 3 percent a year—enough to cover Warren’s proposed wealth tax. And that’s a conservative number; it doesn’t factor in enormous transfers of wealth into the Gates Foundation and his aggressive personal-investment strategy. This year, Gates gave away $35 billion to charity, but his net worth still roseby $16 billion. Given the ongoing success of Microsoft, the tech sector, and the equities markets overall, the growth of Gates’s wealth is almost guaranteed to outstrip Warren’s hypothetical tax, which now seems quite modest indeed. Perhaps too modest—that’s what Bernie Sanders thinks; he’s proposed an even higher tax, capping out at 8 percent of wealth. “I don’t think that billionaires should exist,” Sanders has said.

Warren’s and Sanders’s proposals aim to solve the wealth problem by moving a portion of wealth from private to public benefit. Low capital gains, income, and estate taxes for the wealthy allow enormous fortunes to grow unchecked—and to carry forward to future generations. Meanwhile, the rest of us have to fend for ourselves. The country needs trillions of dollars of investment in infrastructure. A fifth of U.S. children live below the poverty line. Some 40 million adults can’t afford health care.

Gates’s solution to that quandary, meanwhile, is more philanthropy. When it comes to the immense fortunes that billionaires such as him have amassed, he disagrees with economists such as Robert Reich who have argued that philanthropic deductions just allow plutocrats to exercise even more power. Of the spoils of wealth, Gates told his audience yesterday, he should be able to retain “a little bit for consumption, and hopefully the balance to do philanthropic things.” The hard truth is, merely being a billionaire allows someone like him to keep it all in the end anyway.