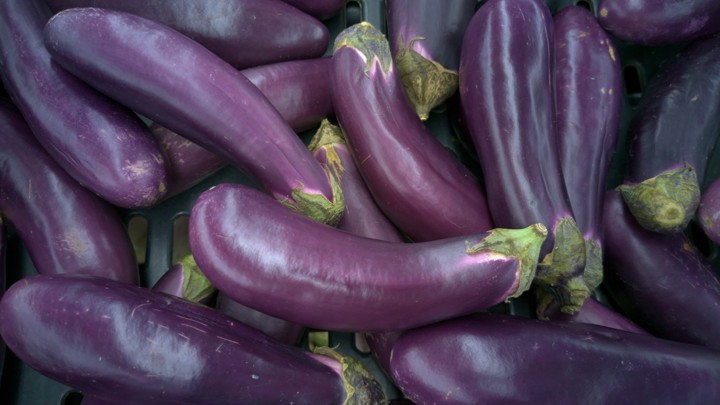 Eggplant is at its best and most abundant in late summer. I rarely cook it, but I’ve learned its schedule over the past few years because of a recurring social-media gag. When sturdy purple aubergines begin to fill farmers’ markets in the United States, people will post pictures of eggplants along with captions that vaguely imply the scene is, in the abbreviated language of the internet, NSFW. Something like, “Dudes, make sure your girlfriends don’t see this.”

It’s not a great joke. There’s no punch line, just an assumption that the viewer understands the reference: When depicted online, “eggplant” is code for “dick.” That’s thanks to the shared cultural lexicon of emoji, the now-ubiquitous smartphone keyboard of smiley faces and cartoon objects. The tiny graphics all have their own literal meanings, but many of them, such as the eggplant, have well-known subtexts. A peach is a butt or, for a rogue faction of internet-dwelling contrarians, a vagina. A grouping of three water droplets is what happens when you rub an eggplant and a peach together.

People’s penchant for pornifying things often doesn’t sit well with the major tech companies that control much of online activity. Apple excludes overtly sexual content in its App Store. Instagram developed an algorithm to hide “suggestive content” and obliterate the scourge of women’s nipples. Snapchat, despite its early popularity as a sexting destination, has tried for years to escape its porny past. And just last week, Facebook, which owns Instagram, took what might be the pickiest measure yet to shield users from one another’s endless desires: It quietly changed its rules to ban many uses of sexually connotated emoji, such as the eggplant and peach, in both public and private conversations on Facebook and Instagram.

The emoji keyboard was developed for Japanese texters, so in the early days of its popularity in America, the scattered and sometimes unfamiliar emoji were friendly shapes, ready to be filled with meaning. Images such as eggplants are not the stars of many vital conversations, but the opportunity to pantomime arousal in a generally nonthreatening way quickly became useful, even in nonsexual situations. I’ve replied to friends’ photos of their beautiful homemade baking projects with a stiff little aubergine more than once. Unicode, too, seems to acknowledge that this is the way a lot of people talk—the group has started to add emoji that more clearly depict lustful intentions, such as waggling tongues and drooling mouths.

In a recent study from the Kinsey Institute for Research in Sex, Gender, and Reproduction at Indiana University, researchers found that adults who use emoji had more romantic and sexual interactions in the previous year and were more likely to get beyond a first date with a new partner. This link nods to two important things that emoji can add to short, text-based conversations: emotional texture and a sense of fun. Seeing joyful cartoon faces and colorful hearts is a different experience than reading “Congratulations,” and a row of perfectly round peaches is different than a friend telling you that your new dress looks nice.

This playfulness is part of the gray area that can make rules governing sexual communication on social media so difficult to enforce. Facebook’s new rule, of course, is about more than emoji. “Certain emojis will only be removed from Facebook and Instagram if they are used alongside a request for nude imagery, sex or sexual partners, or sex-chat conversations,” Stephanie Otway, a Facebook spokesperson, told me over email. Implied requests can count as violations, and consent isn’t always a factor, according to Otway; if the conversation happens publicly, automated content-moderation algorithms might act without waiting on a report from an offended user.

These changes come amid growing pressure on tech companies to mitigate the torrent of sexual harassment and gendered abuse that women often face online, a problem that Facebook has long been criticized for under-addressing. The new rules also outlaw using emoji overlaid on photos to cover nipples, genitals, or butts, which has become a popular way to skirt the platforms’ anti-nudity rules.

But a new rule on emoji won’t necessarily bring clarity to the muddled world of social-media moderation or meaningfully improve the experience of users. What qualifies as a request for sex or as “sex chat” is up to the company’s moderators, who have long complained that guidelines for their decision making change frequently and with little reason. Sexual solicitations without emoji were already verboten under both Facebook’s and Instagram’s user agreements, so the new rule further bans something that was already outlawed.

[Read: Emoji don’t mean what they used to]

Like any other human feeling, horniness bleeds into whatever expressions are available to it in a given moment. Ban the eggplant, and the internet will simply express its literal and figurative erections with bananas, rocket ships, and hot dogs. Facebook says that it would then enact its existing rules on those things too, but social platforms that want to play host to people’s lives are only giving themselves more work by pretending that users’ more prurient interests can be totally excluded from their walled-off digital kingdoms. If even the British court system is being asked to adjust its reality to accommodate the aubergine’s modern meaning, then it might be time to admit that that ship emoji has sailed.

Around the same time that emoji were apparently added to the corporate no-no list, Facebook released detailed assurances about how it would beef up policing of abusive behavior. But if cracking down on emoji is an indication of how those efforts will roll out, then the move is just one more example of a larger problem that has always existed between tech platforms and the users they serve. Companies such as Facebook might have endless data on how people interact, but they seem to understand precious little about why. Communicating desire—something that’s often done happily and consensually, including with emoji-laden requests for nudes—isn’t the same thing as targeted harassment.